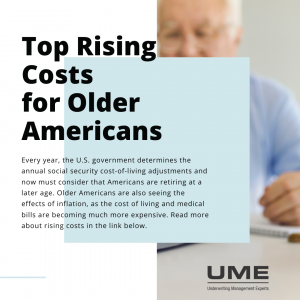 In the early 1990s, the average retirement age for Americans was 57 years old. A 2019 study showed that more than 20% of Americans over the age of 65 were working or looking for work. Americans are now looking to retire later in life for several different reasons, the most common being better health allowing them to work longer, and insufficient finances to support their retirement.

Every year, the U.S. government studies the Consumer Price Index for Urban Wage Earners and Clerical Workers, or CPI-W, to determine a balance for annual social security cost-of-living adjustments, or COLAs. Since 2000, COLA has increased Social Security benefits by a total of 55%.

Economic health also has a huge impact on the determination of the COLAs percentage, and while benefits rise with inflation, the benefits are unfortunately not keeping up with the actual care and spending needed by older Americans.

The Senior Citizens League, or TSCL, estimates possibly the biggest COLA spike since 2009. For the year 2022, they are looking at a 4.7% COLA jump. Through the Social Security Loss of Buying Power Study, TSCL calculated that inflation has had damaging effects on older adults’ buying power, and “social security benefits have lost 30% of buying power since 2000.” The study also found that senior expenses have increased by 101.7% through March 2021, more than doubling the increased social security benefits that have grown since 2000. These statistics speak volumes as to why Americans are now finding it more difficult to retire earlier and continue to work over the age of 65.

Aside from homeowners insurance and gasoline prices going up, older adults are also seeing their healthcare prices increase. The top 3 concerning price increases here are:

For this reason, employers with a diverse workforce may want to consider looking into their stop loss options to have a better handle on their expenses.